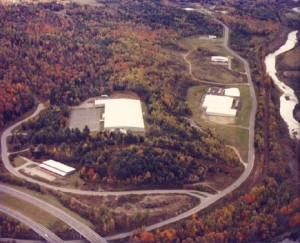 For nearly five decades, the Littleton Industrial Development Corporation has guided the regional economy. When the backbone of that economy crumbled during the mid-20th century, a few dedicated business leaders looked for a way to bring the community back to prosperity. They formed LIDC, which in the 1970s purchased a parcel of land in the first step of many toward creating the Littleton Industrial Park, which has become a robust economic engine in the Littleton region.

Today, there are 18 diverse businesses in the Park, employing some 1,200 area residents and contributing to an annual payroll of $60 million. LIDC continues to seek and develop economic opportunity for the community through its ongoing work in the Industrial Park, helping to create the Paul J. McGoldrick Learning Center, working to develop the River District near downtown, and maintaining partnerships with other organizations to foster economic growth. 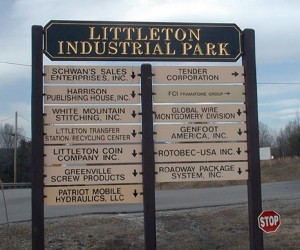 Like most good ideas, LIDC started with a seed and a glimmer of hope. Like most success stories, it has persisted through hard work and collaboration.

Here is the story of how it all began – and how far we’ve come!

For much of the 20th Century, Littleton’s economy depended largely on the shoe factories lining the Ammonoosuc River. Employment rates at the factories fluctuated wildly, and town leaders began working to develop more diverse economic opportunities in the 1950s and ’60s. The Littleton Industrial Development Corporation formed in the 1960s and became an integral entity in this endeavor.

LIDC began this transitional decade by searching for a site to develop as an industrial park. Working with town officials, in 1974 LIDC purchased 108 acres located close to low-cost electricity and municipal water. The Burndy Corporation became the first tenant of the new Littleton Industrial Park in 1976 and today remains in the Park, employing roughly 200 people. READ MORE

The fledgling Tender Corp purchased two Industrial Park lots visible from I-93, and other businesses began to establish offices and plants in the Park. Many of these remain integral tenants of the Park decades later. LIDC also collaborated with the Chamber of Commerce in a successful effort to entice Hitchiner Manufacturing, which would be a major local employer for many years, to set up shop in two vacant shoe factories at the other end of town. READ MORE

LIDC continued its efforts to improve and develop the Industrial Park, attracting businesses like Genfoot America, White Mountain Stitching, Rotobec, and the Littleton Coin Company. In 1995, LIDC was instrumental in the installation of a new bridge from Route 302 across the Ammonoosuc River, providing more convenient access to the Park. The bridge is named for Paul McGoldrick, founder and first president of LIDC. Under McGoldrick’s tireless leadership, LIDC also worked to establish the Littleton Area Learning Center. READ MORE

Headstrong into the 21st Century

More than four decades after establishing the Littleton Industrial Park, LIDC continues its tireless efforts to buoy a strong economy in the region. From one tenant to 18, from a few employees to 1,200 and tax revenues over $750,000 per year, the Industrial Park has grown into a major economic cog in Littleton and surrounding communities. LIDC continues to collaborate with the Chamber of Commerce and with other organizations and communities to strengthen the economy. READ MORE

Looking to the future

The volunteer board of LIDC will continue its efforts to make Littleton an attractive place to do business – whether that means running a high-tech office, managing a warehouse, or cultivating a boutique retail shop. In this endeavor, LIDC maintains partnerships with the River District, Grafton Regional Development Corporation, North Country Council, and Northern Community Investment Corporation. LIDC has also developed a Southern Coos-Littleton Area Partnership to enhance opportunities for small businesses in the region. Additionally, plans are proceeding to further develop the Industrial Park and establish additional businesses and employment opportunities.